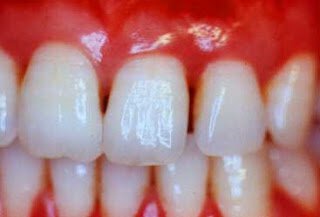 If you have been told you have periodontal disease (also known as gum disease or periodontitis), you’re not alone. An estimated 80 percent of American adults currently have some form of the disease! Periodontal diseases range from simple gum inflammation to serious disease that results in major damage to the soft tissue and bone that support the teeth. In the worst cases, teeth are lost.

Gum disease is a threat to your oral health. Research is also pointing to health effects of periodontal diseases that go well beyond your mouth. So we at Vickie Greenberg Orthodontics
want to let you know some interesting facts and ways to treat the disease.

What is Periodontal Disease?

Symptoms may include the following:
–redness or bleeding of gums while brushing teeth or using dental floss
–halitosis, or bad breath
–gum recession, resulting in apparent lengthening of teeth
–“pockets” between the teeth and gums indicating that the bone which holds the teeth in the mouth is dissolving
–loose teeth
Gum inflammation and bone destruction are largely painless. Hence, people may wrongly assume that painless bleeding after teeth cleaning is insignificant, although this may be a symptom of progressing periodontitis. If your hands bled when you washed them, you would be concerned. Yet, many people think it’s normal if their gums bleed when they brush or floss.

Periodontal disease is a putrid, festering infection of the mouth. Bacteria and inflammatory particles can enter the bloodstream through ulcerated and bleeding gums and travel to the heart and other organs. In recent years, gum disease has been linked to a number of health problems. Researchers are studying possible connections between gum disease and:
–Heart disease: Gum disease may increase the risk of heart disease. Gum disease also is believed to worsen existing heart disease.
–Stroke: Gum disease may increase the risk of the type of stroke caused by blocked arteries
–Diabetes: People with diabetes and periodontal disease may be more likely to have trouble controlling their blood sugar than diabetics with healthy gums.
–Premature births: A woman who has gum diseases during pregnancy may be more likely deliver her baby too early and the infant may be more likely to be of low birth weight.

–See your dentist! See your dentist every six months for a checkup! Regular professional cleanings and checkups make you feel good, look good, and could be a lifesaver!
–Brush and floss daily. Take your time and do it right!
–Use an anti-bacterial mouthwash. Daily use of an anti-bacterial mouthwash helps to disinfect the teeth and gums, and reduces the number of bacteria.
–Straighten your teeth. Crowded teeth are nearly impossible to keep clean. Orthodontic treatment can greatly reduce inflammation and periodontal disease.

You Deserve a Great Smile

Greenberg Orthodontics & TMJ not only offers specialized care, but you can also first see if it’s the right choice for you by booking your FREE consultation. We offer these free consultations to get to know you and help ease your or your child’s fears about what it means to have ongoing dental treatments and how that can improve your overall quality of life.